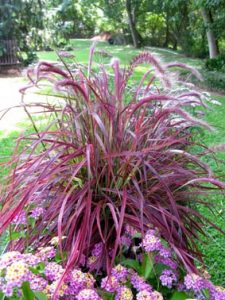 Pennisetum derives from the Latin word ‘penna’ which means feather or plumage and ‘sëta’ which means brush, so, feather brush. It is quite a logical name because the individual spikelets stay in a whorl of feathered brushes on top of the stem.

Dr. E. Rüppel, born in Frankfurt am Main(Germany) in 1794 was a famous explorer(investigator) of nature. Already when he was 23 years old(1817) and later on in 1822-1827 and once again from 1830-1834, Dr. Rüppel made long trips in Egypt; Namibia; Abyssinia and Arabia, principally for zoological purposes. During his trips he collected a number of plants under which the after him named: Pennisetum rüppellii. However, the official Latin name is Pennisetum setaceum. 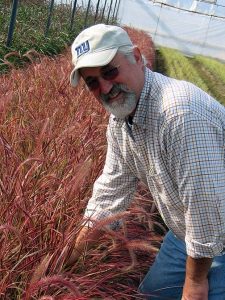 Pennisetum setaceum is a perennial grass with overarching slender leaves and bottle-brush flower spikes, becoming plumose with maturity. The nodding foliage looks like a springing fountain of foliage.

Pennisetum setaceum Fireworks was found by Ron Strasko, owner of Creek Hill Nurseries in the USA.

Pennisetum Fireworks is actually not a new breed but a mutation of Pennisetum setaceum Rubrum. The foliage of Rubrum is inflorescence rose-coloured.

Pennisetum setaceum Fireworks show a fountain of luminous red foliage and is an eye-catching and must-have plant in the garden.