There are a few perennial plants that stand out from the crowd.

Thalictrum is a perfect sample. It is a plant with buds that unfold into perfect parasols. It is also a plant to ‘fell in love’ for, and though the genus Thalictrum is not so well-know as Hemerocallis or Hosta, there are many collectors and/ or ‘secret’ admirers of this exclusive plant. The merits of ‘meadow rues’, their delicate flowers, handsome foliage and graceful habits, are treasured by many gardeners. 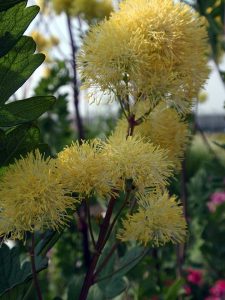 Thalictrum is a Latin transcription of the old Greece plant name thaliktron . It is not known where it is derived from and botanist are not sure as well which plant is meant with thaliktron. The name thaliktron itself is ascribed to Dioscorîdes, a nickname of Pedacîus or Pedanîus, a Greece physician(50 AD) who traversed many countries along with the Roman forces. During this period of his live, he did many botanical observations. As a result, he wrote an excellentbook about medicine, which remained famous till the Middle Ages. (Peri hulês iatrikês logoi hex)

The free encyclopedia says: Thalictrum is a taxonomically genus with poorly understood species boundaries; it is in need of further taxonomic and field research for clarification.

Though the common name is ‘meadow-rue’ there is not any relation between Thalictrum and the family Rutaceae(rues).

Thalictrum is a genus of about 150 herbaceous perennial species, widely spread around the world. They belong to the large buttercup family, Ranunculaceae.

Botanists distinguish them from other closely related genuses by their flower characteristics; the lack of nectar and petals. They also note that some species are dioecus, derived from Greece, di , which means: double or two times. Oikus means: house or dioecious…male and female reproductive organs on separate plants, while others are hermaphroditus, boy and girl plants on the same plant.

Hermaphroditus derives from the Greece word, hermaphroditos, which means: bisexual.

Hermaphroditus, the son of Hermês(Mercurius) and Aphrodite(Venus), originally was a normal man. However, the prehistoric spring-nymph, Salmâkis, felt in such a helpless, burning love with Hermaphroditos that she begged Zeus to unite her body with the body of Hermaphroditos. Her prayer was answered and from that time on, Hermaphroditus became bisexual.

As usual, I am not going to describe the species, but some new cultivars only as well as the humans behind. 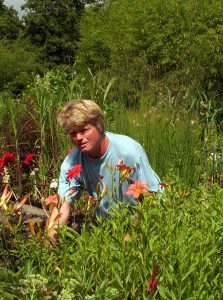 Thakictrum Anne is originated from a crossing ofTalictrum rochebrunianum x Talictrum flavum glaucum. The meaning was to create plants, bearing no seeds(sterile ones). Unfortunately, the breeder – Mr. Dirk de Winter- failed.Dirk, only found some seeds on Thalictrum rochebrunianum, and to his surprise, when the seeds started flowering, he discovered one plant, having very dark stems. It is an fully hardy and early shooting plant which is not sensitive for late night frost in Spring.

Mr. Dirk de Winter is not a grower, but a landscaper and designer of ecological gardens. He likes gardens with natural colours. Some of the gardens he created, may be seen on www. new generationplants.nl.

Delavayi is named after the world famousFrench missionary, Jean Marie Delavay(1834-1895). The Roman Catholic Church dispatched Jean Marie in 1867 to the South Chinese ProvincesKwan-toeng and Kwang-si, and transferred him in 1881 to the Yun-nan province. Soon after his arrival in China, he began to collect plants.

Some remarkable figures: he collected over 200.000 well chosen plant varieties, of which he presented 50.000 to the Museumof Paris. 3000 out of them were new for China and over 1800 varieties were new for the scientists at that time. He discovered 32 new Gentiana’s; 38 Pedicularis varieties; 30 Primula varieties; 34 Rhododendrons; 21 saxifraga’s; 18 Silenes etc.

It is and eye-catching plant in the garden and very suitable as a cutflower. It has the same shape as Gypsophila and can be used to fill and to colour a mixed bouquet. As Thalictrum delavayi Splendide can grow quite tall( over 2 m) support of the plant is recommended. If the variety will be used for the production of flowers, the distance between the individual plants should be one metre as well as the distance between the rows.

The most beautiful yellow Thalictrum, I would say, is Thalictrum flavum Tukker Princess. It is a cross breeding of Thalictrum flavum x Thalictrum Elin. Flavum is a Latin botanical expression for the colour ‘light yellow’ or ‘soft yellow’. The origin of the yellow colour is not the presence of yellow sepals or petals, but rather the absence of such structures, and the abundance of fluffy yellow anthers, all clustered together in dense flower heads. The leaves are produced in good ways up the stems, which can reach 2 metres, so the whole plant take some space. Though Thalictrum flavum Tukker Princess is quite sturdy of itself(a mature plant can reach a height of 250cm) planting in a sunny spot in the garden, is recommended. When grown in shade partly(afternoon shade) plants may become top heave and could lean over. Plant support is needed in such case. The intensive blue colour of the foliage, combined with the golden yellow colour of the flower heads, makes this variety more attractive.

I wrote that I am not going to describe the species, however, there is one exception….Thalictrum ichangense. Ichangense means: derived from Ichang, Hu-pei province, and found on damp, rocky ledges. It is a Thalictrum for shade having fantastic bronze purple Spring foliage,with a contrasting central silver star. I is a small species, 15-20cm. In the perennial border, Thalictrum ichangense may be overwhelmed by neighbouring plants, but is well-suited to a rock garden. Tufts of lavender flowers float over the foliage from Spring to Summer.

Indeed, Thalictrum really is a plant to ‘fell in love’ for, a must-have for collectors and ‘secret’ admirers.