If one ever will visit the RoyalKewGardens in the United Kingdom it is a must to visit the Chinese Style Greenhouse, where more than 1700 plants, introduced from China, are growing. The very beginning of this collection goes back to the year 1665.In China, the story of Mudan began 1900 year earlier. In the period between the Qin and Han Dynasties , 220BC – 220 AD, the Chinese found out that MUDAN – the tree peony- was differentiated from SHAOYAO – the herbaceous peony. Mudan cultivation thrived from 220-589 AD and has continued for more than 1500 years since. During this time, a gradual process of propagation and selection has led to the wide range of tree peony cultivars available now. 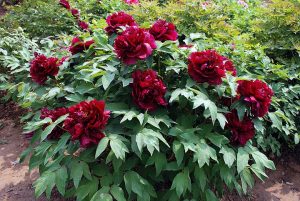 In 1665, when visiting Beijing, people from the East India Company recorded the Peonies that they personally saw. A century later, Joseph Banks from KewGardens in the UK read those papers and saw the Chinese paintings, so in 1787 he asked Alexander Duncan from the same company to collect plants and send them to Kew. After 2 years the blooming of a pink double was recorded as Paeonia moutan Banksii or Powder Ball. This one, the earliest Chinese peony growing in Europe, was damaged in 1842 when the garden was reconstructed. Fortunately, a white pink double was still growing in the garden of the Duncan family in Arbroath. This variety was transplanted into the RoyalBotanic Garden in Edinburgh. In 1794 more peonies were sent to KewGardens. Those were spread to other places, but only a few survived. One of these varieties was described by Andrews as Paeonia suffriticosa.

In 1802 another collection of peonies was shipped to Britain. Out of this collection, a pinkish-white flower with reddish purple blotches attracted wide interest. Later on, after having collected and cultivated seeds of this variety, it was suggested that this was the initial introduction of Paeonia rockii in Europe. The British botanist Robert Fortune collected hundreds of peony plants in China, but when they flowered there seemed to be only five varieties. An expedition to Shanghai, from 1843-1845, arranged by the British Royal Horticulture Association, resulted in a complete failure. The said Robert Fortune was more lucky on his journey from 1838-1851. he obtained 30 varieties of Mudan, said to be the best at that time. This introduction was the start of a major expansion, and by 1860 most British nurseries sold these varieties. 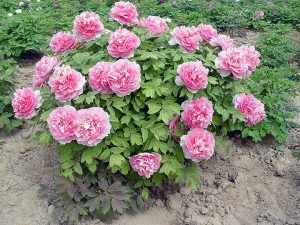 In the second half of the 19th century, the companies Heage and Schmidt in Germany, Krelage in Holland and Verdier in France sold hundreds of varieties as well as the Belgian nursery Van Houtte and the German company Spaeth. In 1890, the French nursery Paillet listed 337 varieties. At that time, the Mudan was widely spread all over Europe. This demonstrated that the Chinese peonies had adapted well to the European environment. In the same period, before the 1914-1918 war, British; Dutch and French wholesalers , exported large quantities to the USA.

Nowadays the import and export from Chinese Mudan, mainly is done by Dutch nurserymen, dealing with reliable Chinese growers and exporters only.

There are 19 famous peony gardens in China. One of these is the DRYTWIGPEONYGARDEN, located south of Yangcheng in Biancang County of Jiangsu Province, divided into 2 parts, the EastGarden and the WestGarden.

This garden has an history of over 700 years. In the WestGarden are 10 red and white varieties that were planted in the Dynasties of Song and Yuan. One tree has reached the height of 1.9 m with a crown diameter of 3.5 m. Nearly 200 flowers grow on it. the branches of this remarkable tree look like old dry wood and that’s why it is named DRY TWIG PEONY.

In 1994, Mudan(tree peony) has been chosen as the National Flower of China.

Popular and easy flowering varieties are: